2009 Year end CWA results. Smoke finished in 4TH PLACE OVERALL in conformation! Shown so lightly, Tanzy finished with a 9TH PLACE! We are so proud of their accomplishments this year! Smoke HIGH SCORE WHIPPET in agility at National Whippet Club of Canada Specialty.

Nov 22 LNB agility trial, Cloverdale. Smoke has a great finish to the year with 2 Qs in 3 clean runs. He was 3 seconds too late with his first attempt at Advanced Standard, even after flying out of the ring to say hello to the crowd, and flying back in to finish the last jump, fault-free. We finally Qd in Snooker, and Advanced Jumpers at the end of a long day. He was very fast in the first part of the day, spectators saw dirt flying out behind him as he ran.

Oct 10 SCOBC oval, Agassiz. Last race of the year for these guys, with Smoke finishing with an interesting day, who should have ended with a nice 10 points, but decided to check out the lure operator after another dog became interested as well. He eventually crossed the finish line, dramatically rolling over in a somersault, trying to get his muzzle off. Probably the most bizarre situation we’ve seen so far! It was Tanzy’s third oval run, and she did a great job gaining points toward her oval title.

Oct 3 CWA race meet, Abbotsford. In the last race of the year, Tanzy recovers enough from her skin injury to run and place 6th, with Smoke right behind at 7th for two TOP 10s. Tanzy also places SECOND in conformation.

Sept 27 SCOBC lure trial, Agassiz. Smoke has one good and one cheating run today, ending up with a 5th placement.

Sept 8 Tanzy has a serious but superficial injury involving a normally innocent-looking spruce tree – not pretty. 16 stitches and a drain later… thanks for all the best wishes from our friends.

Aug 30 NOTRA race, Squamish. Another tough set of dogs, only Smoke was entered today, and he did a great job gaining his full points toward his next level of oval track racer. The oval has become one of his favorite events. Television crews came today – perhaps he’ll be seen screaming at the boxes…

Aug 29 NAWRA race, Squamish. Tough races against these fast dogs, but both dogs managed to get full points toward their sprint titles, with Tanzy at a higher placement. Perfect weather this year, it was a lot of fun.

Aug 22/23 CWA races, Abbotsford. Just a fantastic weekend for Tanzy – TOP 10 both days, 5th in meet on sunday, and taking 2 ARX points each day, as well as a FIRST and SECOND in the conformation matches! We just couldn’t ask for more out of our girl. Enthusiastic Smoke follows with a TOP 10 and 4th in conformation. 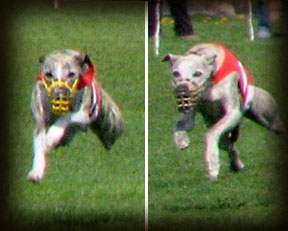 Aug 16 Q-Ball agility, Cloverdale. Smoke Qs in Starters Standard to take his first AAC title AGILITY DOG OF CANADA (ADC)! Only 2 Regular dogs qualified in this event, and he takes a FIRST in his division.

Jul 19 Sighthound Club of BC Specialty, Surrey. Tanzy again takes BEST ALTERED IN SPECIALTY (thanks to breeder-judge Ms Stacy Davis). In between events, Smoke gets a second Q in Intermediate Jumpers. 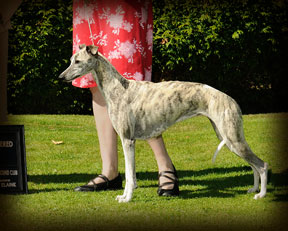 Jul 18 Western Gazehound Club Specialty, Surrey. Hot hot hot. But Tanzy has a nice win with BEST ALTERED IN SPECIALTY! (by judge Edna Martin). In the photo shoot, she was pretty interested in capturing a squirrel she had seen previously, so was very fidgety! Either way, our baby girl is growing up…

Jul 16/17 CKC agility, Surrey. Very, very hot days, Laura and Smoke were both pretty sluggish, but pulled off his last Q to gain his NOVICE STANDARD (AGN), as well as a Q in Intermediate Jumpers. Today’s distractions included a handler ahead of us that had a string stuck to her foot as she moved, giving Smoke the mistaken impression that it was a moving lure, as well as a white garbage bag outside the ring that puffed up with wind during the second run, which he decided was absolutely necessary to check out along the way.

Jul 5 LMWA lure course and show, Mission. Both have a nice run in the lure course, with Tanzy tying for 4th (forfeited), after being hog-tied and dragged in a scary fashion by the line at the end of the run. Smoke takes RESERVE Altered in the field trial specialty show the only day shown. 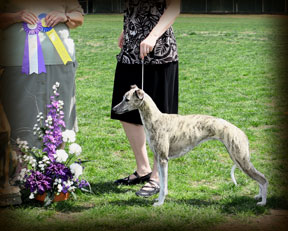 Jun 27/28 Kee-Gigg’s agility, Cloverdale. Although deciding to take off and check out the spectators in the bleachers during his first run, we had another nice weekend, as Smoke QUALIFIED in 3 OUT OF 4 RUNS, finishing his 2 required Starters Gamblers in his first 2 attempts, and taking a FIRST in his division for Starters Standard.

Jun 20/21 CWA races, Abbotsford. Smoke finishes TOP 10 both days, moving up to a B dog this year. We are thrilled when he also placed FIRST and THIRD in the conformation matches (awarded by Ann Fessenden and Helen Brettell), making him the (current) #1 CONFORMATION DOG in CWA. 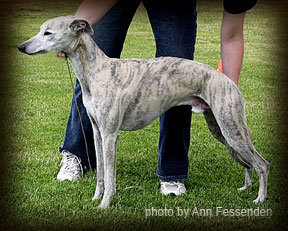 Jun 7 NACA lure course, Ardrossan. Smoke finishes with a 6th in a stake of 23 whippets. Although she has a beautiful run, Tanzy is becoming too clever and is starting to cheat the lure.

Jun 6 NWCC National Specialty, Edmonton. Tanzy takes RESERVE Altered behind her Dam in a nice entry. She is fascinated/crazed by all the ground squirrels in Alberta.

Jun 5 NACA agility, Edmonton. Smoke finishes his first agility title NOVICE JUMPERS WITH WEAVES (AGNJ). He was so entertaining in his efforts to show off for the crowd, that he had spectators laughing and clapping for him. His antics included jumping over the tunnels and jumping out of the ring after the last row of jumps. As he qualified with 100 point score, he was awarded HIGH SCORE WHIPPET by the National Whippet Club of Canada (NWCC).

May 9 PAC agility trial, Pitt Meadows. Our first outdoor agility trial, next to a huge field with tall grass. When Smoke saw the white fluffy tails of the border collies hidden in the grass far away (they were playing fetch), he starting jumping up like a gopher to see where the “bunny” was. Of course there was no bunny but he “thought” they were lure coursing without him. Needless to say, in our run, he walked slowly along, raced up the dogwalk and stood on the top to try to get a better look at the “bunny” in the distance. He kept going to the edge of the ring to look out. We eventually had to leave the ring because our time was up. He managed to Q his last Jumpers run, but with only a few seconds to spare, and after stopping right in front of a jump for what seemed like forever, looking out into the distance. 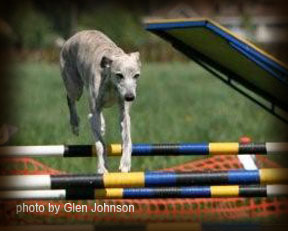 May 3 LNB agility trial, Abbotsford. No Qs today in 3 runs, but so close each time. We also learned that Smoke is starting to read every “twitch” in Laura’s body for signals on direction – which is fantastic except that she doesn’t always realize she’s twitching!

May 2 NAWRA race, Abbotsford. Both finish with a respectable placement among these fast race dogs, taking full points towards their sprint racer titles.

Apr 25/26 CWA races, Abbotsford. Tanzy finishes the weekend with a TOP 10 against a very competitive crowd, and completes 2 titles: DUAL PURPOSE CHAMPION (DPC) and TITLE OF RACING PROFICIENCY (TRP). Smoke has some surprising fast runs and takes a third in one of the conformation matches. Jennifer Hughes captures some great action shots.

Apr 18 Whippet Club of BC lure trial, Lavington. Smoke takes a 4th in a very competitive stake of 18 whippets, ending with an enthusiastic, diving mouthful of dirt. He takes HIGH SCORE SHOW CHAMP whippet as well. Tanzy follows closely behind with an NBQ, even after a nasty burn from the lure on her last run. One tough cookie, she is! She then takes BEST OF BREED ALTERED at the field trial conformation show.

Apr 11 Pacific Agility Clan trial (AAC), Cloverdale. In our first Agility Assoc of Canadian agility trial, Smoke QUALIFIED IN 2 OUT OF 3 RUNS, gaining a leg towards Starters Standard and Starters Jumpers. We are so thrilled – 9 Qs in 11 runs!

Apr 4/5 Whippet Club of BC agility trial (CKC), Kelowna. Laura and Smoke’s very first agility trials, and we were so happy with his enthusiasm, especially considering the minus degree temperatures for his early morning runs. In four trials in two days, he QUALIFIED IN 7 OUT OF 8 RUNS, and of those, 6 were 100 point scores! He had a blast, and won fun HIGH SCORE WHIPPET prizes for each trial as well. As he needs a second judge to complete his novice titles, this gives him 2 legs towards both Novice Standard and Jumpers with Weaves titles.

Mar 29 Oceanside show, Maple Ridge. Laura takes BEST OF WINNERS with Cara Takahashi’s Morley to finish her Canadian Championship. Laura comes home to find Smoke has greeted her by throwing up in her slipper.

Mar 22 LMWA Lure trial, Mission. The first course of the year, Smoke takes FIRST in his stake to finish his FIELD CHAMPIONSHIP (F.Ch.)! He took a flying somersault partway through, and ended up losing his voice from all his barking at the lure. Tanzy ties for SECOND in her stake with another littermate, so we forfeit to THIRD. Not to be outdone by her brother, she also made a sliding flip over the lure at the finish line.

Mar 14/15 CWA race, Abbotsford. The first race of the year, both take TOP 10 both days, despite the constant rain which eventually turned to snow. First day, Smoke had another fantastic run, placing 6th overall, ahead of his sister for the first time. Not too affected by the cold, he also took FIRST in the conformation match, awarded by Anne Herrett. Tanzy has some terrible breaks but still manages TOP 10 with 7th overall. Second day, Tanzy turned on the heat, taking 5th overall and ties to split the top ARX points, bringing her up to 9 points. Smoke took a third in the conformation match, awarded by Penny Wilmot. Love this photo taken at the end of the last race showing their thoughts on the cold, slushy mix of mud and snow. 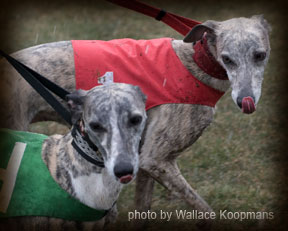 Mar 8 Wildlife incident #3. Tanzy flies towards the pond, where 2 ducks are casually floating. As she has an aversion to water, they are at a standoff. The ducks fly up, then come down to taunt her. She circles the pond, refusing to get her feet wet. Finally the ducks take off, to her satisfaction. Order is restored in the Baratta household.

Mar 7 Allstar agility fun match. Smoke and Laura’s first agility fun match. Bitterly cold weather all day long, but we had a blast. No fun qualifications, but came close twice, including a .79 of a second too late for our very first Gamblers event.

Jan 16 Wildlife incident #2. Tanzy almost gets the rabbit again; we heard the close-call squeak. She came inside filthy with dirt and spent the rest of the day staring sorrowfully out the window.

Jan 1 Dogs are bored stiff with all the snow. But they enjoy having stepsister Becca over to play with for a couple of days. 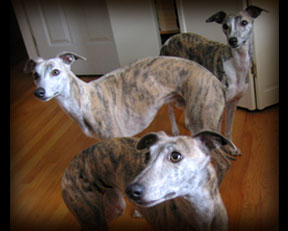