2010 Year end CWA results. Smoke finished in 4TH PLACE OVERALL in conformation, and top Canadian dog, for the second year in a row! Plus 2 agility titles.

Nov 20 LNB agility trial, Cloverdale. Last event of the year, and are thrilled when Smoke Qs his second attempt ever at a Masters Standard! What a happy way to end the year!

Nov 7 LMWA lure trial, Abbotsford. Just entered Smoke today, and he has some nice turns and great enthusiasm barking around the course, earning him a FIRST place in his stake!

Oct 30 Kee Giggs agility, Cloverdale. Smoke has a less than successful first run in gamblers with plenty of opening points, but run out of time for the closing. He does Q in his second run in Adv. Snooker, to complete his 3 level qualifications.

Oct 9/10 CWA race meets, Wisconsin. We stay with the lovely Mary Beth, Doug and crew this weekend, where we’re welcomed with open arms and plenty to eat. This track is on a slight uphill grade, so is interesting to watch the extra efforts. Smoke was pulled due to his beat up nose, so is quite disappointed. Tanzy has some nice runs, and gets her placement for arx points, but due to the 50% rule and the high proportion of fast arx titled dogs, is unable to take them. She takes a TOP 10 on the second day, a nice way to end the year. Laura has her first judging “assignment” for the match on Saturday, and enjoys learning even more in this position. It is a fantastic trip, and were so lucky the weather was so nice throughout the 3 weeks. Dogs are very tired when they get back, and can’t wait to get back to their routine.

Oct 2/3 CWA race meets, Minnesota. Taking a few weeks off, we had a fun drive out to Cokato, where we stayed with the lovely Mary Huff and her crew. It takes some getting used to different boxes and location for Tanzy, but Smoke is on fire this weekend. He ends up TOP 10 both days, in Sixth on the second day, and the bridesmaid to arx points, and takes a FOURTH in the conformation match. However, he insists on gouging out his nose, trying to get his muzzle off, so that he is pulled from the following week of races. We see many great sights on the trip, and such great company.

Sept 11 Matsqui agility, Abbotsford. First event after a busy summer. Comes close again with Jumpers, but Laura pulls him off course accidentally as he runs faster than expected today, and is very in tune with any slight movement. But he manages to Q a very hard-to-come-by Advanced Gamblers! He stands right at the last jump for awhile, then looks back at me to make sure it’s really what I want. Cheeky boy!

Aug 28 NAWRA National, Squamish. Beautiful weather and gorgeous, lush field. Another National race event, where placements aren’t too high with so many fast race dogs, but they work hard to keep up. Can’t wait to see photos of the event..

Aug 21/22 CWA National, Abbotsford. Our first National race event, where Tanzy takes Top 20 both days, with Smoke not far behind in an entry of 54 dogs. Second day, Tanzy goes Fourth in the match, thanks to Fred Luehrs, and despite being Miss Fidget.

Aug 20 CWA National Fun Match. Have a blast showing friends’ dogs in the match, with a FIRST in class for all 3 dogs: FIRST for ‘Dickens’ in Racing Ch. class, FIRST for ‘Morley’ in Altered Female and FIRST for ‘Becca’ in Champion Female, thanks to judge Karen Lee!

July 24/25 CWA race meets, Abbotsford. Warm days and tough competition as Tanzy finishes TOP 10 on Saturday, and went THIRD both days in the match. Smoke takes a FOURTH and a FIRST in the matches, thanks to judges Aaron Sweptson and Jade Sweptson. Thank you also to Jennifer Hughes and Steve Buchholz for beautiful handling on the final round.

July 17 Western Gazehound Specialty show, White Rock. Very nice double header today when Tanzy takes WB Altered for 2 more points under judge Barbara O’Neil (thanks Linda Buchholz for offering and taking her around the last time), and Smoke takes WD/BOB ALTERED, then on to BEST ALTERED IN SHOW by judge Barbara O’Neil! What a great time! 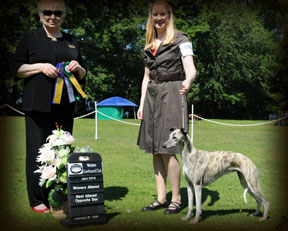 July 10 Q-Ball agility, Abbotsford. Smoke has another nice outdoor day with minimal runs. He Qs a Snooker, and is within 2 seconds of his very clean Masters Jumpers, with very high temperatures.

July 4 LMWA Lure Course, Mission. Tanzy has a phenomenal run in her first course with top points in an entry of 60 whippets, along with enthusiastic clapping from the crowd. The lure stopped halfway through in the second run, but she does a great job finishing, ending up half a point behind a First Time entered dog, for a SECOND placement in her stake. wow…

July 2 LMWA Specialty show, Abbotsford. Unseasonably cold, windy days this weekend. In the final round, Laura has the privilege of handling Karren’s beautiful puppy Allison to Best Puppy in Sweeps. Smoke takes a Third in a large class of altered dogs, then went on to take BEST IN COURSING CLASS (pictured), by judge Iva Kimmelman, despite a wardrobe malfunction involving pantyhose on the loose. 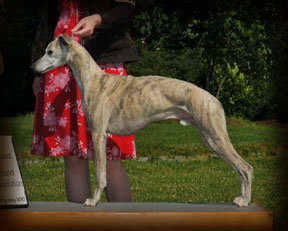 June 12/13 NAWRA race meet, Abbotsford. Smoke completes his SPRINT RACER (SR) title with full points. Tanzy gains 20 full points toward her next title. Very hot weather, with 27 degrees, but dogs handled it well enough. Thanks so much to helpers with our wild child. Today, only one race each day has them both in the same race, much to our relief.

Jun 6 Q-Ball agility, Abbotsford. An unsuccessful outdoor day with 3 runs, but all Masters level runs. Very few qualifications today overall. In the first run, Smoke, along with many other dogs, is enchanted and unfortunately distracted by the Alpacas just beyond the ring.

May 16 Friends’ hounds enjoy the property for Marco’s birthday party, including an unexpected swim in the pond, which included an interesting combo of mud and balloons.

May 14 Tyee agility, Mill Bay. Trip to Vancouver Island with friend Candice. The hounds enjoy meeting Italian Greyhound ‘Blister’ on the ferry “Pet Area”, until they become her extreme love interest. At the outdoor trial, Smoke has his fastest run ever to start; it was unfortunate that it included a knocked bar and several wrong courses in his excitement. He was having a great time and blasted through tunnels on the outside edges. Even though the weather turns hot and he starts to drag, he Qs an Intermediate Jumpers, but he needs one more judge to complete his title. We visit downtown Victoria and are swarmed by people wanting to befriend the whippets, many wanting to take photos.

May 9 LNB agility trial, Cloverdale. After a pretty slow start in the morning, Smoke Qs his final Advanced Standard to complete his ADVANCED AGILITY DOG OF CANADA (AADC)!

May 8 NAWRA race meet, Abbotsford. Tanzy completes her SPRINT RACER (SR) title with full points. Smoke has a nice finish, gains full points toward his title, in addition to destroying his second muzzle. The weather was gorgeous until the unexpected thunder, lightning and hail storm arrived, soaking those in t-shirts and sandals. But it is certain that this storm was less noisy and destructive than both dogs running together in 3 out of 4 runs, screaming and thrashing in excitement, and feeding off each others’ frenzy.

May 1/2 CWA race meets, Abbotsford. Tanzy finishes TOP 10 on Saturday with Smoke right behind, in cold, wet weather. Tanzy gets an ugly skinned hock on Sunday, so was scratched after two heats. Smoke has a great Sunday, finishing at #8 and taking a FIRST in conformation! Thanks so much to breeder-judge Carole Adley. Love this pic taken on Sunday by Dean Williams. 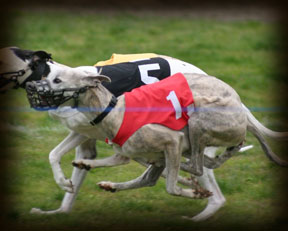 Apr 22 Whelping, Langley. Witnessed the first litter of puppies being born by friend Janet with ‘Becca’, half-sister to our whippets. 11 puppies, with a mix of fawn, red, and blue brindles. Friend Beth with Lark has 9 puppies the same day in Washington, with a mix of fawns and reds. Beautiful puppies!

Apr 11 PAC agility trial, Cloverdale. Smoke Qs 2 of 4 runs, including a first Advanced Snooker. The happy surprise was a success with our first Masters level run with Jumpers at the end of a long day. ‘Grandma Lee’ was looking on when he was so great in this run, probably his most exciting run to date! 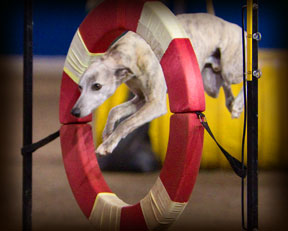 Apr 3/4 CWA race meets, Abbotsford. Seven new fast dogs make it a tough weekend, along with rain, hail and wind. Both finish TOP 10 on Sunday with Tanzy at #8 and Smoke at #10, who takes a THIRD in conformation on Saturday.

Mar 13/14 Q-Ball agility trial, Cloverdale. Smoke Qs 3 runs, including a first Advanced Standard and two Jumpers to complete his Advanced Jumpers level with a first in his division. What a great team this weekend when the zoomies disappeared after the first run.

Feb 28 Having a great time watching the Vancouver 2010 Olympics wrap up, with friends and whippet Morgan.

Feb 21 LNB agility trial, Cloverdale. We’re so happy when Smoke Qs his Snooker to complete his STARTERS GAMES DOG OF CANADA (SGDC) title. Very close in a few other runs – 1.5 seconds overtime on our jumpers run, and a 5 fault run on our advanced standard. Good enthusiasm from Smoke on a busy weekend.

Feb 7 Dogs are enjoying the unusually warm beginning of the year. First practice of the year held with decent weather. Smoke was maniacal and wouldn’t keep his muzzle on, so was pulled from his first race, much to his dismay. After he had some time to think about the situation, he managed to pull himself together and had a great time.